When one is living on a council estate – bred within a culture which, as part of its everyday existence, issues forth a regular diet of violence in a myriad of forms, as well as a bad education system and continual poverty – ways out of the societal conditioning can appear limited, even for the most optimistic. Yet, a television program changed everything for me, for the rest of my life. It was 22nd November 1976, the British journalist and TV presenter, Janet Street-Porter, host of The London Weekend Show, featured interviews with The Sex Pistols, the Clash and Siouxsie Sioux. The Pistols also performed “Pretty Vacant”, “Submission”, “Anarchy in the UK” and “No Fun”.1

It was a beacon of hope. It was the mid 70s and Punk seemed to have arrived out of nowhere. Its influence was not only on our televisions in our homes and newspapers, but also on the streets. Young boys and girls, I’d once known as ‘normal’ unexpectedly changed into punks. The top-down, imposed, dominating banality of everyday life was suddenly disrupted by an unstoppable force. The punk attitude also awakened people to new ethical, philosophical, cultural and political commentators and thinkers. It transformed grass-roots culture and spawned many different kinds of radically in-tune, bands and political activist groups.

For our generation music was our art and it was owned by us. It was not just about creating songs to make money, it was more about changing the world. Another influence that arrived shortly after, was Kathy Acker’s punk novel, Blood and Guts in High School, written in the late 70s, but not published until 1984. 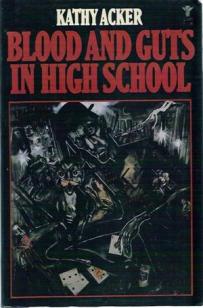 Her flamboyant and post feminist punk attitude had a refreshing zeal, expressing an anti-establishment spirit similar to the Russian feminist and art’s activist group Pussy Riot that we know of today.

“Kathy Acker was interested in writing as a performative act. To accomplish her goals, she blurred the boundaries of creation and plagiarism. She mixed autobiography and pornography through cut-up techniques. These methods resulted in the exploration of the instability in the female development of identity.”2

Acker lived out her life in a subversive manner. I don’t know whether she was inspired by Situationism, but it as if she was wilfully living out Vaneigem’s slogan “We have a world of pleasures to win, and nothing to lose but boredom.”3

In Donna Harraway’s seminal text A Cyborg Manifesto in 1991, the concept of the Cyborg was a helpful metaphor for reconsidering one’s condition, place, and relationship, as a critique against the coercion of human identity by the patriarch; and for breaking out of the repeated loops/binary trappings in society. Haraway proposed that to deconstruct worldly inequalities, a remixing of our own identities was essential towards regaining, at some level, control and emancipation for humanist liberties. This and other critical approaches have become a part of Furtherfield’s ethos.

2 thoughts on “The beginning”